Watch TED 2014 Without Having To Travel — Join Us For TEDxBuffaloLive! 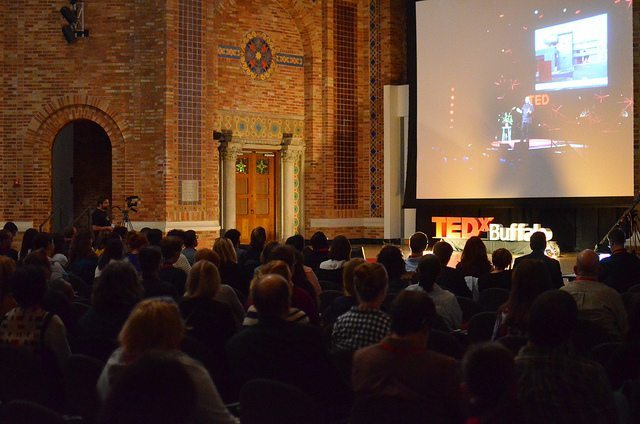 Here’s the really short pitch and explanation of TEDxBuffaloLive: If you wanted to watch the 2014 TED conference, the big one with Bill & Melinda Gates, Mark Ronson, Yoruba Richen and other fantastic speakers, it would cost you at least $6,000 to attend, $2,500 to show it at your office or $600 for a lonely laptop experience.

But the teams behind Buffalo’s TEDx events — TEDxBuffaloWomen, TEDxBuffalo, [email protected] and TEDxUniversityAtBuffalo — would like to give people in Western New York a taste of “big TED” talks before most of their friends have seen them. For free. With Wi-Fi. So we asked TED, and we can do that.

On Wednesday, March 19, 2014, from 11:30 a.m. to 3 p.m., you can watch a selection of speakers from the previous day’s TED talks on a big screen. (OK, so this setup isn’t exactly “live”-live, but we have to accommodate for a West Coast-based event. Plus, this way we can cherry-pick some of the most in-demand and relevant speakers.) Bring your laptop or tablet if you need to get some work done, as the library has good Wi-Fi. Plan to eat lunch at the library’s rather great Fables Cafe or brown-bag it. And by all means, tell your friends and get them to register for their free ticket.

Who you can see at TEDxBuffaloLive

We have our pick of the biggest day of TED 2014, but here are a few we think are interesting and intend to highlight:

What we need from you

It’s free — which is way, way cheaper than TED 2014 — you can probably sneak out of work if you bring your laptop or tablet, and it’s a great chance to see inspiring talks months before they arrive on the web. Mark it on your calendar, and we’ll see you there.