What Do People Get Out Of Speaking At TEDxBuffalo? 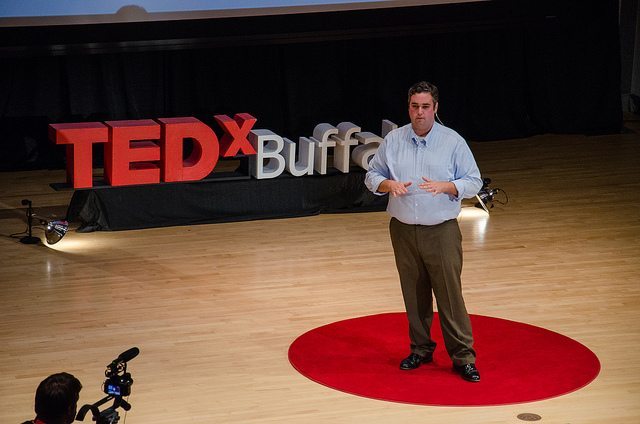 Every year, the TEDxBuffalo team asks about a dozen people, most of whom we have never met, to do something really big: put themselves, and their idea, in front of hundreds, maybe thousands of people.

Conferences and events solicit speakers as a matter of course. But TEDx events like TEDxBuffalo are a bit different. There is no pay, you only get 18 minutes, and your talk must be accessible to a broad, often global audience, not just a hotel conference room full of peers. And, to be honest, we generate quite a few emails and put target dates on your busy calendar.

But there are real benefits to being asked to speak at TEDxBuffalo. Responding to an email (see what I mean?), a few of our previous speakers offered up the benefits they saw from giving a talk. Here are their lightly edited responses to, basically, “What did you get out of doing a TEDxBuffalo talk?”

TEDxBuffalo is a blast! Building a talk to fit within an 18-minute presentation window helped me to focus my thoughts for clarity and impact. The TEDx staff was great, and BEAN media productions made a beautiful video allowing me to share my message with a larger audience. To date, it has been viewed more than 50,000 times, bringing Buffalo sunlight to people who would never have experienced it otherwise.

Presenting at TEDxBuffalo allowed me to share my passions with the world on a platform that is concise, professional and effective.

I regularly get compliments about my TEDxBuffalo talk from strangers –you never know who is watching. I’ve definitely gotten business opportunities and credibility within my field out of my presentation.

Like most things, you only get what you put into your presentation, and you only get one shot, so prepare to over-prepare, and you’ll still wish you had prepared more afterwards.

TEDxBuffalo 2013: “The Power of Puppetry”

TEDxBuffalo 2013 provided a great opportunity for me to reflect on why I love what I love. Knowing I had 18 minutes to fill on stage was a challenge that left me with a better understanding of my craft and my life’s passion. Thanks to TEDxBuffalo, I made connections with other local creatives, who I have since gone on to work with on projects such as short films and regional commercials.

I have also made close friends on the TEDxBuffalo organizer team, who encouraged me to step up and volunteer for the 2014 event. I have already exercised my strengths as a graphic designer for the team and look forward to coaching future speakers as well.

Bishnu’s talk details his journey from Bhutan to Buffalo, N.Y., including the state-sanctioned beatings and forced emigration that led his family to flee, and the unexpected grace he found upon arriving in the United States in 1992.

There are lots of reasons to speak at TEDxBuffalo, or any TEDx event. We are not a traditional conference or speaking event; we think that means the rewards can be much more interesting.