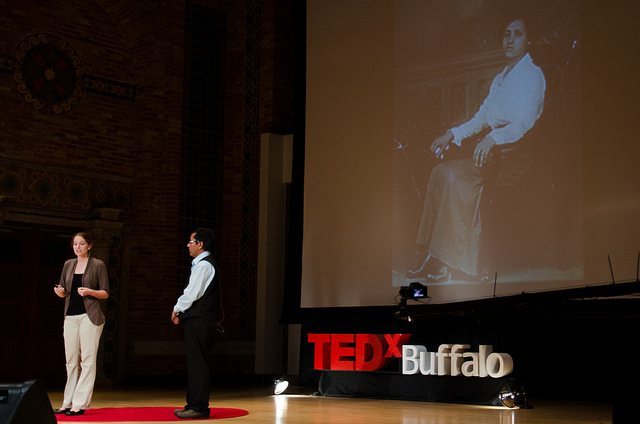 Seriously, what the heck is TED? The TEDxBuffalo committee gets asked that question all the time — by family members, friends and acquaintances…and, yeah, even by potential speakers, sponsors and attendees.

We know our About page isn’t exactly super-clear about what TED is either. (We tried, but there’s still a lot of jargon-y stuff on there.) As it turns out, it can be pretty difficult to clearly and succinctly explain TED and, by extension, TEDx, and TEDxBuffalo.

But, we’re going to try, because if we only ever use jargon and super-important-sounding explanations, it makes TEDxBuffalo seem way too exclusive and high-brow — and that’s really not what we’re about. We mean it when we say that anyone can give a TED talk and, likewise, that anyone can attend.

Each of us on the committee has our own version of an “elevator pitch” we use when answering the question. Here they are, distilled into one simple explanation.

Technically, TED stands for “Technology, Entertainment, Design,” which was the focus of the first-ever, one-off TED event near Silicon Valley in 1984. Now, TED is the yearly, really big, international “mother conference,” and it focuses, more broadly, on “Ideas Worth Spreading” — which is as vague and vast as it sounds. Everyone from Bill Gates and Al Gore to Google’s founders and Nobel Prize winners have given TED talks, as have a whole bunch of relatively unknown people who simply have intriguing projects and ideas. You can see most of these talks online, for free — and chances are, you’ve probably seen at least one of them circulating on Facebook or Twitter, in an email from a friend or wherever.

TEDx is basically a licensing program. There are TONS of people with awesome, TED-worthy ideas, so as of 2009, cities and towns, or like-minded groups of people, can create TED-like events on a more focused scale under the TEDx brand. All TEDx events have to abide by the same rules as “big TED.” Every talk is uploaded to the TEDxTalks channel, which currently includes more than 16,000 talks, given at more than 5,000 events in 133 countries.

Which leads us to…

Simply, we’re one of those TEDx events, and TEDxBuffalo 2014 will be our fourth yearly event. We give Buffalonians with great ideas a chance to share them, and we give our attendees the opportunity to connect with other really cool people around the area. Basically, we want to help spread the word about awesomeness happening in our area, whether it’s related to astronomy, puppetry, bees or a host of other topics. Each speaker’s talk is no longer than 18 minutes, in keeping with TED rules.

Oh, and there are tacos. And sometimes cupcakes.

Sounds cool, right? (We think so, but we might be a little biased.) If you’d like to join the ranks of TEDxBuffalonians, we’re currently looking for potential speakers for this year’s event. If that’s not your speed and you’d rather be in the audience, keep an eye out for attendee applications, coming soon!